The St Vincent de Paul Society has a long history of supporting refugees.1 This article provides an update on our support to and advocacy for the most vulnerable of these people: those still held by Australia in PNG and Nauru; those in locked detention in Australia and those in our community without Commonwealth Government support during the COVID pandemic.

July this year was the seventh anniversary of the decision of then Prime Minister Kevin Rudd in 2013 to put in place the policy that ensured no people who arrived in Australia by boat, seeking our protection, would ever gain permanent settlement in Australia but would instead be sent to PNG and Nauru.

On 17 July, the National Council issued a media release highlighting the deteriorating situation for the nearly 400 people still in PNG and Nauru, and the hundreds sent to Australia for medical treatment who are still in closed detention here.2 This release has been one of many issued in that last few years conde 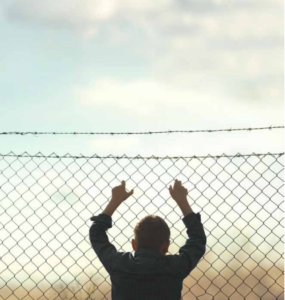 mning this policy. In November last year, the Society was highly critical of the repeal of the Medevac legislation after just nine months, describing the move as a new low in the treatment of asylum seekers and refugees by the Commonwealth Government.

Recently the Commonwealth Government has acknowledged that COVID risks require the removal of some people from immigration detention in Australia, but its solution is to move those it sees as a threat to the community to Christmas Island. The Society believes the simpler, cheaper, safer and more humane solution would be to release those who are no risk to the community Vinnies: Helping refugees and advocating for their rights (including those brought from PNG and Nauru) into detention arrangements in the community.

The Society is also dismayed that the Commonwealth Government, after seven years, still has no plan for the safe and permanent resettlement of many of these people and that billions of taxpayer funds continue to be used to hold them offshore and in closed detention in Australia.

Also, for many years the National Council has been advocating for people who came to Australia by boat before July 2013 and who have since suffered the unfair ‘fast track’ process. The Council condemns the uncertainty of temporary protection visas and the cuts in Government payments to people on bridging visas. In April this year the Council called on the Commonwealth Government to extend available payments and support to people seeking asylum, noting that thousands of people on bridging visas have no access to any form of financial support before or during the COVID-19 pandemic, even when they have no other income.

The National Council is a signatory to the Refugee Council of Australia’s Nobody Left Behind campaign demanding greater support to these vulnerable people.5 The campaign is focussed primarily on getting the JobSeeker payment, or equivalent, extended to the roughly 100,000 people seeking asylum currently in Australia, which includes around 16,000 children and young people. The Society has also provided ‘on the ground’ evidence of the impact of the Commonwealth

Government’s neglect of these people at a Senate Committee hearing in July.6 This campaign has had an impact at the state and territory level, where most of these governments rightly see temporary visa holders (including asylum seekers) as part of our community and so have provided some assistance to them.

The National Council is assisted in its advocacy by the Vincentian Refugee Network (VRN), a group of members and employees of the Society from most states and territories, who work to support people who have sought Australia’s protection, but many of whom continue to be mis-treated by the Commonwealth Government. The remainder of the article gives recent examples of that work.

Supporting People in Our Community

The Society supports many refugees through its network of parish-based conferences across Australia. But the more vulnerable people need support from more specialist groups which Vinnies has in several states and in the ACT. In Adelaide the Society has established the Vinnies Migrant and Refugee Centre to do exactly that.

One of the key injustices of the Commonwealth Government’s treatment of people who sought Australia’s protection arriving by boat is the ‘fast track’ process described recently by Claire Victory, our National President as ‘unjust and unfair, including denying effective review of decisions on their refugee status determination’. The Adelaide Centre’s Chair, Henrietta Wighton, says the most vulnerable group are people who are still involved with this process or who have had their claims rejected by this process.

‘These are the people who hold temporary bridging visas only and most of these people have had their access to Commonwealth support stopped, leaving them with nothing unle 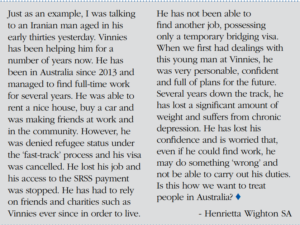 ss they can find work. The Refugee Council of Australia estimates that there are approximately 12,700 people in this position in Australia at present. To make matters worse for this cohort, some of the bridging visas are only issued for periods of three or six months, after which an application for renewal needs to be made, and some people have no current visa at all. It is very difficult to find employment in these circumstances,’ said Ms Wighton, who is also a member of the VRN.

A further injustice of the ‘fast track’ process is that those who are successful and found to be refugees are only given temporary protection visas for three to five years, rather than the safety of permanent protection. Ms Wighton said ‘of those who have been able to find work, most of the employment is casual, seasonal or part-time. Almost all have lost their jobs due to COVID and while eligible for JobSeeker, none is eligible JobKeeper.’ Since March the Centre in Adelaide has seen a threefold demand for assistance from people on temporary visas, the majority of whom are on temporary bridging visas and not eligible for either the JobSeeker or the JobKeeper allowance.

Vincentians visit people in immigration detention facilities across Australia. But the arrival of nearly 200 sick people from PNG and Nauru to Australia for medical treatment posed a new challenge. All of these people remain in locked detention, many for a year or more. Almost half are in makeshift accommodation at Kangaroo Point, a suburb of Brisbane.

Rebecca Lim is a Queensland member of the VRN, who has been working with people in PNG and Australian detention facilities for many years, most recently in Brisbane since the end of 2018. Rebecca is part of a group of 15 people who volunteer their professional services across a range

of disciplines including health, migration services, community development and education.

Rebecca and her colleagues provide practical support including the provision of sim cards and material aid as needed. This group is the first port of call for the men when they arrive in Queensland.

Ms Lim said ‘all the people are very unwell. They stay in their rooms for most of the day. Counselling is offered by tele-health due to COVID, and the men are disengaging. Many are displaying signs of resignation syndrome. They have no hope of a resolution. We’ve seen notes from men that show the environment of indefinite detention is contributing to their deteriorating mental health.’

‘Because of COVID-19 restrictions all visits have stopped and calls have been made for the men to be moved to safer accommodation in the community with family or with community members who have offered them accommodation,’ she said.

The Human Rights Commission9 and infectious disease experts10 support the release of detainees into suitable housing in the community if they do not pose a significant security or health risk. The Commonwealth Ombudsman also supports reduction in the numbers of people held in immigration detention facilities to address COVID-19 risks.1

Ms Lim asked ‘why is the department choosing detention over other temporary options in the community that are better and cheaper? People can be in the community while their resettlement is resolved. The Government is choosing to spend a fortune on hotel detention when that money could go on other more important things such as aged care and nursing,’ she said.

The Refugee Council of Australia has recently costed locked detention at $350,000 annually per person. That’s $70 million per year for the two hundred people still locked in detention after being transferred for medical treatment last year. By contrast detention in the community costs less than a third of that and issuing them with a bridging visa reduces the costs to only $10,000 annually person.

‘This indefinite detention is no plan for a safe future for these people. Suggesting people who are refugees return home is not a plan and many of them have been rejected by the US. So what is the Commonwealth Government’s plan for them?’, Ms Lim asked.

There are number of Australian community groups supporting the people still held offshore in PNG and Nauru. Vincentians are also involved in this work. I work through a Canberra group, Manus Lives Matter.

Through this work I visited PNG several times, the last time in March this year, just before the first COVID-19 case was detected in PNG. All the men I met had some degree of mental illness, which cannot be treated in PNG, because the cause of their illness is the seven years of incarceration there.

Men with serious physical conditions that require evacuation to Australia, but which is now highly unlikely with the repeal of the Medevac legislation. So once again, the men must rely on the inadequate medical system that generated the 2018 emergency and which required evacuation of many of their friends in 2019.

Safety is also a concern to all the men. There have been many robberies and assaults when they leave their accommodation. And of course, they were and still are concerned about COVID-19 in a country with little capability to detect the disease or to treat it.

I was most concerned about the many men who have been rejected by the US. After seven years the Commonwealth Government still has no plan for their safe resettlement.

♦ Dr Tim Mckenna is Chair of the Vincentian Refugee Network.

Our Members are resilient: Rallying around the Illawarra