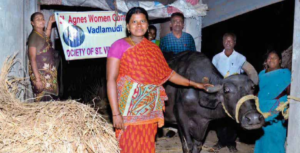 Development projects can also be requested by a partner country. National Councils of our partner countries work with their conferences to develop and send project applications for approval and funding by Australia. Most projects funded by Australia are around $2,000 in value.

In a three-year period, July 2017 to June 2020, Australia received 54 project completion reports from projects it had funded, of which 49 included details of direct beneficiaries. An example of a direct beneficiary of a project that provides a milking cow is the person who receives the animal, and their household. Indirect beneficiaries may include other community members where any excess milk or milk products are more readily available locally.

The majority of projects in India are Milk Cows, Sewing Machines or Small Busines 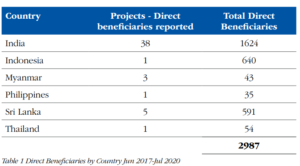 s projects, which benefit a smaller number of people per project but aim to provide beneficiaries with a direct means of improving their income. This is in comparison to projects in Sri Lanka which tend to benefit more people by design. For example, an electricity project or water purification project providing a source of electricity or water filter to 20+ families, which aim to provide a service to beneficiaries which will then allow them to pursue better health and education outcomes. The project reported on in Indonesia is a coffee growing and training program and is into its 3rd year of operation, which is why the number of direct beneficiaries is relatively high. You can read more about this project on our website.

Many of the Small Business projects are ‘Revolving Loan’ projects, which means that the beneficiary is loaned the money and allowed to pay back in small instalments. This means that the money can be re-loaned when it has been repaid and also removes the need for businesspeople to have to rely on local money lenders who often charge high interest rates.

While there has already been an increase in rate of completion reports received during the last three years, due to the recommendation of a Review to actively request completion reports being implemented, the Overseas Partnership Advisory Committee is working on encouraging partners to report on all completed projects.

If you’d like to find out more about overseas work including projects go to our website, or you can contact the National Projects Coordinator, Bec Bromhead, or the ODP Facilitator, Jude Blacklock – both via overseasadmin@svdp.org.au. You can also contact Jude if you would like to sign up for a two-monthly email update on the overseas program. ♦ 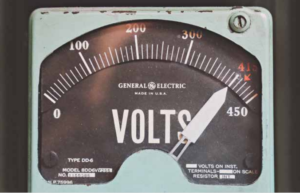 The Sri Lankan National Council identified a group of families that the Trincomalee Diocesan Council was supporting who were living in homes without an electrical connection. The families were displaced due to conflict and had relocated some years before – some children had never lived in a home with electricity.

The project connected electricity to 24 homes and beneficiary families reported feeling that they could now “live as equal citizens”, and young people “felt happy as they were now more able to pursue their studies and also watch and listen to what is happening around them.” ♦

In India, the National Council worked with St Joseph’s conference in the Guntur Central Council Region to develop a project to benefit 15 construction workers in their community. They provided each worker with a bicycle to allow them to get to construction sites more easily from their homes. Ten tradesmen also received some tools and five painters were given some painting equipment to assist them in their work. ♦