Vinnies continues to distribute funds generously donated to the Vinnies Bushfire Appeal, supporting people as they enter the long recovery phase after the Black Summer bushfires. As of Monday 2 March, $9.8 million has been spent to directly support bushfire victims nationwide. Here we share the story of Anne Hewitt, one of the many people your donations have helped. 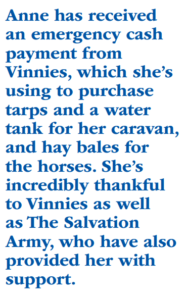 Anne Hewitt has spent much of her life giving care and shelter to others; she fosters elderly and abandoned animals, and was her late mother’s carer until she passed away in 2018.

It seems a cruel twist of fate that someone so giving can lose everything, but that’s exactly what happened when a bushfire tore through Anne’s property in November last year.

Anne had moved to Upper Fine Flower, a rural area north-west of Grafton, just a few months prior. After her mum passed away she wanted a new start, so she sold her farm, bought a block of land, and moved her animals and two large containers onto the property.

“I had my little shipping container set up on my new block and I had everything that I’d bought to build a container house,” Anne said. “All the materials, like special cladding, walls and flooring, insulation and all the rest of it.”

It was to be the perfect little home for Anne, surrounded by fields where her horses could graze and her dogs could run. But it never came to be – the fire burst through before the contain 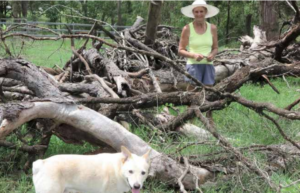 er could be built into a fully-fledged house, and devastatingly, that meant none of it was insured.

“When I tried to get insurance, they said it’s not quite a house and it’s not quite in contents and it’s not quite this, so I just fell through the cracks,” Anne said. “So I said alright, leave it because in a couple of months I’m hoping to get it made into a house, and we’ll go from there. That never happened.”

Anne is unspeakably grateful that she was able to get most of her rescue animals out in time, moving them to an evacuation centre in Grafton over the course of three days. With the fire hot on her heels, she was left trying to coax the last two ponies into a horse float. They wouldn’t budge, and Anne had to make the difficult decision to leave them behind.

She spent the afternoon at the evacuation centre, worried sick about the ponies and her property. As soon as she could, she headed back to Upper Fine Flower to assess the damage. 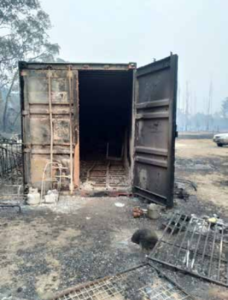 “I drove out along the road, and I was dodging fire bombs and trees falling and all the rest of it, and got out to where I live – or lived – which is about a 50-minute drive, and got to the front gate and looked out and said OK, my container is on fire,” she said.

“That was at 9 o’clock that night. No sign of my ponies, so obviously I didn’t sleep that night.”

Anne spent the night at the evacuation centre, but made the return journey to her property at first light the following day. Everything was scorched – but miraculously, her two ponies stood in the midst of the destruction, alive and well.

That day, Wednesday 13 November, is the last time Anne has been home.

“I haven’t been back to my block because I just can’t get that round my head. When I went back out to help collect the ponies the next day, the blackness and the burn and the smell and everything, I just said, ‘I can’t do this, I can’t come back yet’.”

The loss of the expensive shipping containers, solar panels and building materials is a huge blow, but Anne is tough – she can take that in her stride. What is truly difficult to deal with is the loss of her mum’s possessions – clothes, photos and other mementoes.

Anne said she and her mother were “best of friends” before she passed away, a year before the fire.

“I sort of hadn’t had the chance to get over it and sort things out, so I had all her belongings in the container. So there’s a lot of emotional stuff going on there. It’s more difficult to get over than the fire thing.”

For now, Anne and her family of horses and dogs are living on a camping site in Grafton. Thankfully Anne’s caravan was stored away from her property when the fire hit, so it was spared and now serves as a temporary home.

Anne has received an emergency cash payment from Vinnies, which she’s using to purchase tarps and a water tank for her caravan, and hay bales for the horses. She’s incredibly thankful to Vinnies as well as The Salvation Army, who have also provided her with support.

Anne isn’t sure what happens next, and she doubts whether she’ll ever be able to return to her property. For now she’s just surviving.

“I’m a bit of an emotional wreck but I’m also happy that I got my animals out in time,” she said. After everything Anne has been through, new troubles continue to surface: her car just broke down, and mere weeks after the fires, floods have hit Upper Fine Flower and caused further damage to her property.

We still need donations to the Vinnies Bushfire Appeal so we can continue to help people like Anne, who are in the early days of recovery and facing an uncertain future. Every single cent donated is being used to support people affected by the bushfires – many who are now facing floods as well. ♦

The advocacy voice of our members