Growing up in Singapore, I remember that we had a French priest who was passionate about St Vincent de Paul 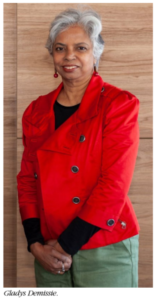 and so our new parish was called St Vincent de Paul! From very humble beginnings – we met in the basement of a shophouse – a beautiful church was built and four Conferences were established, one each for women, men, girls and boys.

My mother was heavily involved in church life and encouraged both my 13-year-old self and my brother, to join the youth conferences and together with the older members of the girls’ Conference (they were 17–18 and working) we visited people in their homes.

We also took children on excursions, to the beach or sight-seeing, all things that they wouldn’t normally have had an opportunity to do. We’d organise a bus, pile them in and all the girls Conference, six or eight of us, would take them out; it was a fun outing for us too.

However, I also learnt some hard lessons. I remember one home we visited, the father couldn’t cope with what was happening, so he very sadly committed suicide and left his wife with six kids to look after. At that time, in Singapore, there was no such thing as welfare, so the family was living hand to mouth and charities like Vinnies were their only lifeline. We’d visit and help out with food but I don’t recall providing help, like we do now, with paying bills or providing vouchers.

My mother wanted us to get involved because our own upbringing had had its challenges. She instilled in us an appreciation for what we had and even if we didn’t have much, there were always people who were worse off than us and we could give back to the community. We grew up respecting hard work, family, compassion, fairness and equity and those values have stuck with me all my life.

In 1975, I left the Conference and my comparatively sheltered upbringing in Singapore and moved to Australia to study. I went on to get married, have children and my parents later joined me in Australia. To my mum the church was always important so when she settled in the parish of Our Lady Help of Christians in Perth, she resurrected the local Vinnies Conference and got me to help with the finances by becoming the treasurer and I’ve been involved ever since.

For most of my career I worked for the ATO; while most people are loath to pay their taxes, my attitude was and still is, more about how the taxes we pay allow us, as a society, to look after the disadvantaged through our welfare system.

When I visit the WA Conferences, I like to talk about the work of the Society more generally. As Vincentians, visitation is close to our heart but the Society throughout Australia does so much more. Very recently, we undertook a facilitated workshop that built on last year’s address by Robert Fitzgerald to the WA State Council and the wider membership which focussed on servant leadership. Via my fortnightly newsletter, The Vincentian, I have been sharing, with the wider WA membership, the outcomes of the workshop and how servant leadership helps us to focus on what we do and our desire to make the society we live in a better place.

Things happen in life that help to build empathy. My own life has had some significant challenges and so when I go into someone’s home or hear their stories, there is a level of solidarity about what it means to make ends meet, what life is like when you’re struggling. Going to church is part of the conversation but at the end of the day it’s about community; that’s where we see the Church in action. To me it’s very much about how you live your life that demonstrates the things that matter and the person that you are. ♦

Gladys Demissie is State President WA. She has been a member of her local conference in WA since 2009 and a member of the WA Finance Committee since 2013. In 2014 she was appointed to the WA State Treasurer role and took on the role of Chair of the Finance and Audit Committee in that year. She became State President WA in July 2018

A passion to preserve the spirit of youth