Refugees in Australian detention and in our community still face serious challenges due to Federal Government policies.[1] This article updates the situation, outlining Vinnies’ response. 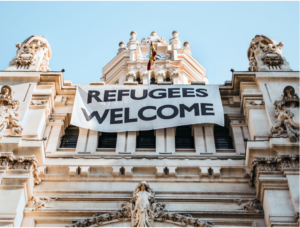 In October Senator Jacqui Lambie decided to oppose the Federal Government’s proposed legislation to give Border Force more power to remove mobile phones from people in immigration detention. She sought advice from Australians through a web-based survey and then published her reasons for that decision in an article on her website.[2]

Of 75,500 respondents, 96 per cent advised her to vote against the bill. Senator Lambie opposed the bill principally because the Government already has the power to stop people in detention using their phones illegally. She also noted ‘it’s just cruel to punish a class of people for the actions of a few individuals’ and that ‘we don’t have to be cruel unnecessarily’.

The National Council issued a media release calling on the Senate to oppose the bill[3] and sent a copy to Senator Lambie. The Council also issued a second release welcoming her decision to reject it.[4]

Unfortunately, this win still retains the status quo. The cruelty of unnecessary, indefinite detention of innocent people continues to take its toll. The Council’s second media release noted that ‘the rate of self-harm in immigration detention is 200 times higher than in the Australian community’. The situation for people held in Australia, and in PNG and Nauru, will only be resolved when they are safely and permanently resettled. The Federal Government still has no plan to do this for the hundreds of refugees not accepted by the US. The quickest, safe solution would be to take up New Zealand offer to take these people.[5]

People in Our Community

Recently there has also been a serious deterioration in the situation for the thousands of refugees in our community made destitute by the Federal Government’s continued lack of support during the pandemic. As part of the Refugee Council of Australia’s Nobody Left Behind campaign,[6] National Council President, Claire Victory wrote to the Federal Social Services Minister Anne Ruston before the Federal Budget seeking justice for these people.

Sadly, the Budget not only failed to institute proper support for these vulnerable people, but instead halved the existing funding. The Refugee Council of Australia, in condemning this decision, stated ‘Service providers across the country have reported at least a 300 per cent increase in the need for emergency food and rental relief for people seeking asylum since the pandemic began’.[7]

The Society also issued a statement after the budget noting that people on temporary visas (including refugees) continue to have limited access to financial, housing, and medical assistance. ‘They have lost their jobs and are unlikely to find suitable employment at this time. They have very few options and yet this Government continues to ignore their plight.’[8]

In addition, the Refugee Council recently brought to public attention another unfortunate Federal Government decision, the stripping of financial assistance from up to 500 refugees and people seeking asylum transferred to Australia from PNG and Nauru for medical attention several years ago.[9]

Last month, several hundred people (including families with children) were moved out of community detention after only three weeks’ notice. Rebecca Lim, a member of the Vincentian Refugee Network (VRN), is working with these people in Queensland. Ms Lim says: ‘Now they have to fend for themselves in the middle of a coronavirus pandemic. People over 18 cannot study or do any training, they have no housing, they have no case-work support, and they have no income support.’[10]

Finding work is extremely difficult for these people, many with medical problems and all having endured seven years of detention.

In the four states immediately affected (QLD, NSW, SA and WA) Vincentians are working with specialist refugee agencies to help these people, but the task is overwhelming. In Queensland, Nathan Middlebrook (also a VRN member) says ‘the Society is providing emergency relief to assist these people. After contacting the free call number, they are connected to a specialist, virtual assessment team to determine their needs and deliver the support. Social visits are also being co-ordinated for local Vincentians to further assist individuals and families where needed.’[11]

Several hundred additional people are expected to be transferred to the community soon, including over a hundred people in Victoria once COVID restrictions are lifted.

Claire Victory recently wrote to the Prime Minister raising concerns about the negative impact of this policy on these people and the difficulty the Society and other organisations are having in supporting them. While government support for these refugees is an essential first step, their situation will only be justly resolved when they are given a permanent home in Australia or another safe country. Until then the Society continues to advocate for them and help them in their need. ♦