The real estate listing said the ‘sprawling property’ in Riverstone, western Sydney, built in 1985, had never been on the market before 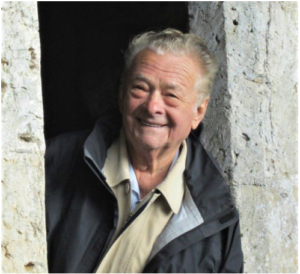 and was run as a community centre by the Saint Mary of Cherso (SMOC) Association. This non-profit, the ads explained, was dedicated to giving European immigrants, mostly from Italy and Croatia, a place to socialise, adding that the proceeds of the sale would be donated to a mix of charities and other organisations, including St Vincent de Paul Society NSW.

Fortuitously, the property was sold in mid-2019 to a local businessman who plans to convert it into a women’s refuge centre, providing counselling services and crisis accommodation. Daniele’s friends and family know he would have been incredibly proud for this land will be used to serve and support some of the most vulnerable people in the community.

When the legalities were concluded the Society learnt that the SMOC Association had pledged to donate $100,000 in the memory of Daniele Velcich, their president from 1966- 2018, who had recently passed away. Many years earlier he had ensured that no member would profit from the Association, and that all funds would be donated to charity when it closed.

Half of this generous gift was earmarked for the Vinnies Van, the balance would be allocated to other good works undertaken by the Society.

The late Daniele Velcich was born into an Italian family in Cherso (or Cres), Croatia in 1931, fleeing by boat at the age of 18 because of Yugoslavian president Tito’s discrimination against Italians. From Venice he began a series of transfers to refugee camps before finally being approved for Australia. He arrived in March 1950 on what he called ‘a beautiful sunny Sydney day’.

Daniele would go on to live what his daughter Linda calls ‘a life of service and being charitable’, which began with organising a dance in a local hall and donating the profits to the local hospital. He was a parishioner at several local churches, including St Patrick’s at Blacktown, St Andrew the Apostle Catholic Parish at Marayong and the Croatian Church at Blacktown. He assisted members of the community with visits to the hospital, transport and conversing with family members overseas.

‘He was always there to help a mate and would never say no to someone in need,’ as Linda says.

Daniele Velcich established the vibrant, well-appointed club, which ran many functions and events, bringing migrants together to celebrate their culture. A picturesque 1402 chapel in Beli, near the Adriatic island town of his birth, is also named in honour of St Maria Magdalena of Cherso.

Following the 88-year-old’s death the decision was made to wind up the Association and the property was sold. To date, around $1.9M has been donated to charities across Australia. In the 2020 Australia Day awards his adopted country honoured Daniele Velcich with the Medal of the Order of Australia in the General Division (OAM).

While the honour was posthumous this extraordinary migrant would, as his daughter says, have been incredibly proud to know that his community efforts were appreciated and that the proceeds of the club’s sale would be used to help so many worthwhile causes. ♦

Anti-poverty week message from the President