NSW members and volunteers recorded a major win in the lead up to the State Budget with the Build Homes, Build Hope petition achieving the required 10,000 signatures to be tabled in NSW 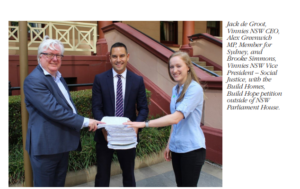 The Build Home, Build Hope campaign was launched at the Social Justice Forum in September last year in an effort to increase the amount of social housing by an additional 5,000 new homes each year for the next 10 years to meet the demand of the social housing waiting list. 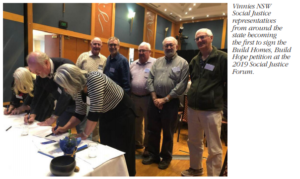 With more than 100,000 people waiting for a place to live, including some who have been approved for over 10 years, our members and volunteers have been hard at work collecting signatures, meeting with their local MPs and raising awareness of the urgent need for everyone to have a safe place to live.

Jack de Groot, Vinnies NSW CEO, urged the government to heed the call for more social housing ahead of the State Budget on 17 November.

‘The NSW Government has the opportunity to make a difference to the lives of thousands of people by providing the safety, security and stability of a place to call home,’ he said. ‘Having a home is the foundation from which people are able to plan beyond one day at a time. Without a secure place to live, it is incredibly difficult for people to live healthy lives in the present, let alone plan for the future.’

Alex Greenwich MP and Brooke Simmons pai d tribute to our members and volunteers for their efforts in gathering the required number of signatures.

‘Vinnies members and volunteers live and work in communities throughout NSW. They understand the needs of people who are struggling to get by and know that having a place to live is one way we can make a meaningful difference to improve lives,’ said Mr Greenwich.

‘I want to thank everyone who has supported the Build Homes, Build Hope petition over the past year,’ said Ms Simmons. ‘When we launched the petition in September last year, we knew it was an ambitious target, but one that was essential to ensuring everyone was able to live with the safety and security of a place to call home.’

Vinnies NSW is grateful for the time and effort put in by members and volunteers to collect the 10,000 signatures over the past year. This achievement highlights the collective power the Society has, to bring about change and shape a more just and compassionate world.

A special mention goes to the Social Justice Team of Rhiannon Cook, Mark Ludbrook and Sarah Boyle for keeping track of the signatures and engaging with Alex Greenwich MP to have the petition tabled in NSW Parliament in the lead up to the State Budget. ♦