World Youth Day is a worldwide encounter with the Pope that typically happens every three years in a different country. Oceania Youth Coordinator Luke Brouwer represented the region at World Youth Day 2019, held in Panama in January. Luke shares his WYD experience with The Record. 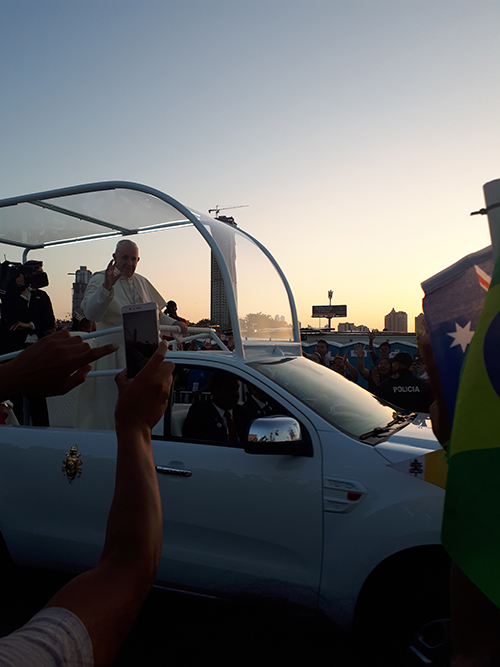 A disciple is not merely someone who arrives at a certain place, but one who sets out decisively, who is not afraid to take risks and keeps walking. This is the great joy: to keep walking. You have not been afraid to take risks and to keep journeying. Today we were all able to ‘get here’ because for some time now, in our various communities, we have all been ‘on the road’ together.

Before World Youth Day, the first thing that came to my mind when hearing about Panama is the Canal and, unfortunately, I did not know much more than this. The choice of Panama as the venue for WYD was often questioned by those attending. Although it is a small country with a population of four million, its 85 per cent Catholic population and locality for North and South American nations made for an extremely passionate contingent.

I was one of seven Society youth representatives from around the world in Panama for the WYD and FAMVIN.

The humbleness of the event was clear to see—the international President of St Vincent de Paul attended the event as an ‘ordinary’ pilgrim without fanfare or introduction, while the Panamanian Vincentian President handed out mattresses to the pilgrims.

The chance to collaborate and learn about the challenges and issues affecting the other regions of the world, from both a general and Society perspective, was too good an opportunity to miss.

The main purpose of FAMVIN was to meet and to share in the charism of what it means to be Vincentian, particularly in Latin America. Each day consisted of Mass, catechesis, many meal breaks and nightly cultural celebrations.

The catechesis sessions were quite light but provided an excellent chance to meet pilgrims from other countries. We were split into language groups, with the English-speaking group the smallest compared to Spanish and Portuguese.

Topics discussed in catechesis included describing what makes the ‘perfect’ Vincentian, Vincentian trivia and a mock court case to decide if our facilitator could genuinely say he was guilty of being Vincentian! The main issue I had with the sessions was that they almost felt like a gap-filler between meals, which seemed to be an hour break for every 45 minutes of content and ran on ‘Latin time’. Precedence was given to shortening sessions that never started on time to ensure we could get to the meals at the specified hour.

Other FAMVIN events included an opportunity for discussing the works of each group. The Society’s International Youth Coordinator Willian Alves told the gathering about the Society’s good works and showed a video from the 2018 Salamanca meeting (highlighting young Vincentians’ great talents for flag waving). Then probably the oddest part of the meeting was the presentation/testimony from actor Clarence Gilyard of Walker, Texas Ranger fame, discussing a film festival he is putting together.

The absolute highlight of the Vincentian meeting was the nightly cultural celebrations. Each night, different countries (mainly from Latin America) showcased song and dance, turning the meeting into a mini carnival, with deafening drums and sweaty dancing. The organisers and participants did a fantastic job, and it was encouraging to see the sense of spirit between so many different countries. It was a great example of how to celebrate culture in a way that does not patronise but allows each country to show off something special from their homeland.

After FAMVIN, the seven international Society youth representatives moved on to our WYD home stays, about four kilometres out of the centre of Panama City. Leo, the Asia Youth Coordinator, and I stayed at the home of a local mother and son. The generosity and kindness they showed to strange pilgrims was terrific and made us feel at home for the week we were there.

The week of WYD activities included an Australian pilgrim meeting with more than 1000 Australians, catechises (including a talk by Canberra-Goulburn Archbishop Chris Prowse), a youth festival, vocations fair, a welcome Mass celebrated by the Archbishop of Panama and the Way of the Cross. It also included three events with Pope Francis—the welcoming ceremony, WYD vigil and the Closing Mass. The final Mass, held in a huge field just outside of Panama City, was attended by 700,000 people.

Raising the Rate of Newstart