St Vincent de Paul Society members can play a vital role in pushing for structural change in their local communities to improve the lives of vulnerable people, writes Peter McNamara. 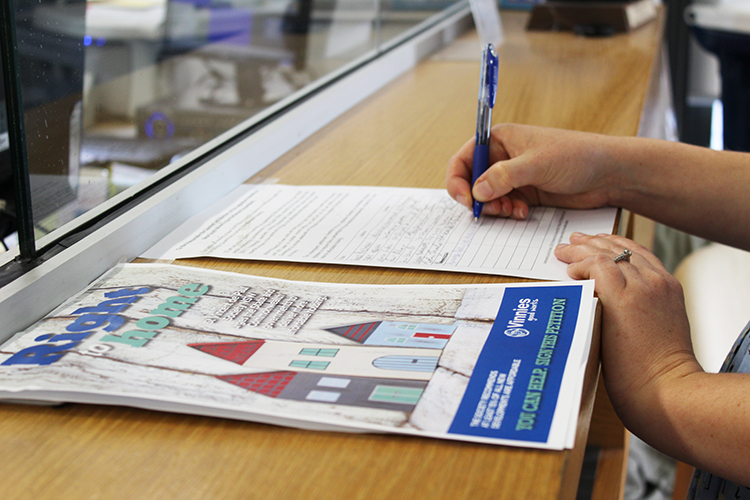 Like many, I joined my local Vinnies conference for one reason—to do charity—but found much more. I discovered that each relationship in service led to justice—a hand up for those we were assisting.

That was 35 years ago. In the last five years, I have been part of a social justice campaign that has engaged members and volunteers, changed political party policy and brought the needs of the disadvantaged to the minds of our community leaders.

The bridge over the Great Dividing Range of poverty

From its outset, the Society of St Vincent de Paul was intended to be a bridge between rich and poor, between the powerful and the powerless.

Not long after we European settlers conquered our own physical Great Dividing Range in this ancient continent, Frédéric Ozanam spoke of a great divide in his world:

The question which is agitating the world today is a social one. It is a struggle between those who have nothing and those who have too much. It is a violent clash of opulence and poverty which is shaking the ground under our feet. Our duty as Christians is to throw ourselves between these two camps in order to accomplish by love, what justice alone cannot do.

That struggle of Ozanam’s day, launched from the vast inequality evident in the industrial revolution and exploding into the violence of the French Revolution, is still with us. We still have great poverty, even here in our rich country, so deep we cannot meet the need. We still have homeless people sleeping on our city streets—a living memorial to a monumental failure of public policy.

Our inequality is evident not just from those sleeping rough, but in the data on those couch surfing and on the brink of homelessness. Now, the challenge of having a home is confounded by an unholy alliance between on the one hand the raw cynicism of politicians, and on the other, the jaded cynicism and distrust of the voters. This mutual cynicism is evident in our lack of resolve to fix our housing crisis.

Our role today as Christians remains to moderate our social problems. The social teachings of the Catholic Church are clear—we should have a preferential option for the poor. We are called to love the poor, to take our place by the barricades and moderate the battle.

In 2016 our National Council published The Ache for Home report. In response to that call, in New South Wales we decided to launch a campaign that would enthuse our members, and that would result in better housing for people experiencing disadvantage.

We wanted to energise our members and volunteers and to reinforce and extend our reach into the community.

How could we do it?

The groundwork was simple. We laid a foundation of internal Society structures that would provide social justice leadership. Following the youth representative model, we appointed a Vice President (Social Justice) on State Council and every other Council with a specific remit of social justice. Those Council representatives formed a Social Justice Committee to advise the Council. That was easy.

The strategy from there was based on a general plan that grew as we went.

1. We gathered our members at annual Social Justice Forums in Sydney. These 140 members worked hard on responding to the key issues they experienced, and top of the list was housing.

2. We developed a policy statement on housing, representing our shared position, so that any member or volunteer had full authority to promote the policy to the community.

3. We identified a clear and specific policy goal so that we had a headline ‘ask’. The housing problem is complex and the solutions many. The goal we chose was ‘inclusionary zoning’. This has been used in cities around the world—in London and New York—and in Australia, to capture a proportion of the value generated by new developments for the community; in this case, for affordable housing. Inclusionary zoning is often opposed by developers, particularly those banking land in the hope it will be up-zoned, because it may reduce their profit margins.

Housing pressures were greatest in the inner Sydney area. The NSW Government had created a new, independent body to lead Sydney planning, the Greater Sydney Commission. This presented an opportunity to embed, in planning rules, affordable housing for those on low incomes.

4. We started a formal campaign asking the NSW Government to mandate affordable housing targets of 15 per cent for all new developments. We launched the Right to Home Campaign in October 2016 at our annual Rosalie Rendu Lecture, where the Honourable Susan Ryan AO (our first Age Discrimination Commissioner) spoke about the crisis in housing for older women.

5. We held a series of campaign events across Sydney, west to Mt Druitt, north to Newcastle, to Burwood and Leichhardt in Sydney’s inner west, south to Hurstville, Liverpool and Kingsford. Led by members, volunteers and staff, these events took various formats and were opportunities for local and state government politicians to respond to questions about what they were doing to make housing affordable.

6. We visited members of parliament and local government councillors across the state. Armed with our NSW social justice statement, our members and volunteers could speak confidently for the whole Society. The politicians said:

You ring, I might find out. You write, I should see it. You visit me, I wake up. When 20 others in the party room say they’re all getting the same message, I sit up and we do something.

7. We had a bright idea—we could petition the parliament. Our members in parishes and our Vinnies retail outlets championed the cause, and in just over a month our petition had not only the 10,000 signatures needed for the issue to be debated in parliament, but over 16,300 signatures from across the state.

We then approached the key political parties to see if they would present the petition to the House. Following initial reluctance from both parties, in October 2017 Damien Tudehope, then the Liberal Member for Epping, agreed. The day after Tudehope posted the petition on the Parliamentary Noticeboard, Labor announced it was generally supportive of the Vinnies’ inclusionary zoning policy.

The day the petition was presented to parliament we walked past the homeless persons tent city in Martin Place. We saw Tudehope introduce our petition, witnessed by a record-breaking 200 members, volunteers, staff and friends of the Society, requiring additional security and broadcast of the parliamentary presentation to a separate room. Labor Opposition Leader Luke Foley, his Deputy Leader Michael Daley and Greens housing spokesperson Jenny Leong supported the petition, while then Planning Minister Anthony Roberts argued against mandatory targets on the grounds they would impede overall housing supply.

After the petition had been presented, we continued to advocate for affordable housing targets. March 2018 saw a minor breakthrough, when the Greater Sydney Commission recommended Affordable Rental Housing Targets of 5 to 10 per cent in its plan, A Metropolis of Three Cities. In May 2018, the NSW Labor Opposition officially adopted an affordable housing policy with mandated targets of 15 per cent on private land, and 25 per cent on government-owned land.

8. We worked with other organisations. In May 2018, we formed a partnership with the Sydney Alliance and started encouraging local councils to take action.

10. We organised a large public assembly. State and federal elections were looming. We made a tripartite agreement with Sydney Alliance and the Everybody’s Home campaign to hold a Housing and Energy Assembly at Sydney Town Hall in March 2019. We managed to fill Sydney Town Hall’s 2000 seats. The politicians addressing the assembly faced a crowd of people from diverse communities across Sydney and united in our call for action on affordable housing. Politicians, and all in attendance, were moved by stories from people who experience poverty and disadvantage first-hand.

The assembly did not result in any commitment by the Coalition Government to inclusionary zoning, but lobbying in the lead-up to the event helped secure funding commitments from NSW Labor towards new social housing and increased homelessness services.

The NSW election is over, and we are still trying to push social and affordable housing higher up the government’s agenda. We are working with other community groups who want communities in which each person has a stable home where they can thrive. 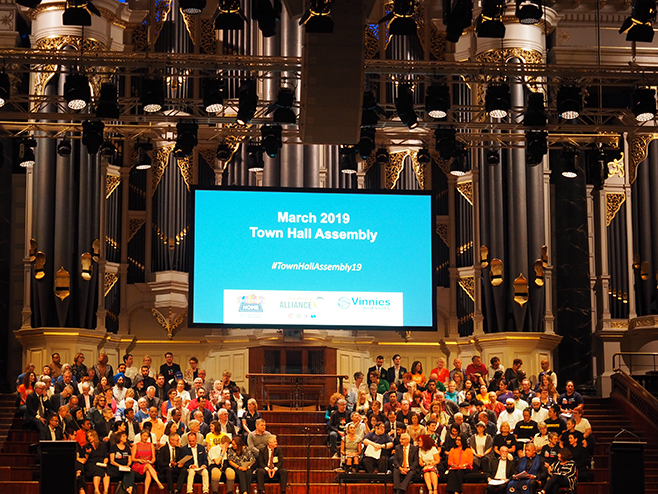 Frédéric Ozanam was intrigued with social issues, and hence with political issues. Vinnies members are not and should not be party political. However, our advocacy for affordable housing targets, or indeed for any other policy position, is politics. We are getting the community to change its heart, change its mind and to change the rules. We are doing politics but, like Ozanam, good politics grounded in good values and good works, accomplishing by love what justice has not.

We offer the positive counterpoint of cynicism and politics from both voters and politicians. I think our point of difference is that we are inspired by Jesus’ call, and the call of the social teachings of the Church, to seek first the poor.

I joined Vinnies to do charity, but over 35 years, found justice. Wrapped around charity and justice—in the members, volunteers, staff and those they assist—I found love. I found the hand of God, an earthy, grounding spirituality.

I urge any members interested in making a difference to have a go at the social justice issue that interests you and that sparks the imagination of others. Our Councils are keen to encourage new ideas. It is not difficult to implement new structures within the Society to accommodate social justice. We have shown how the Rule is flexible and permits constant innovation.

Our members and volunteers desire to be social entrepreneurs in the mould of Ozanam and his fellow uni students. We have members that have campaigning and influencing skills. Alone we can do a little, but together we can speak up, and give those that most need it a hand-up so they don’t need yet another hand out.

Those interested in knowing more can ring their social justice representative on their State or Territory Council.