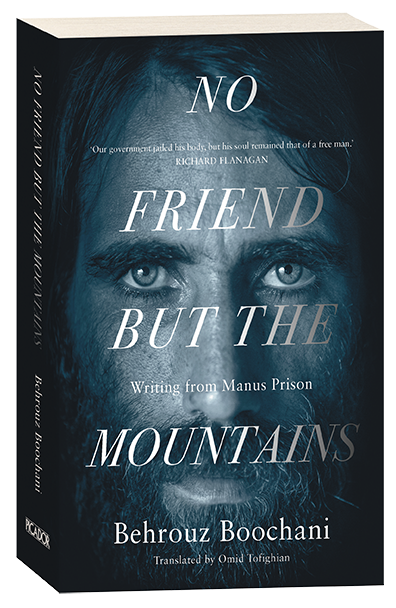 One of the great challenges of our work as Vincentians is to enter people’s lives and to experience the world through their eyes. It is fairly easy to help people with food and with other services. It is a little harder to listen to people’s stories and to spend time with them while we are visiting. But to enter their world, to taste it, smell it and feel it as they do is a rare gift that blesses both us and the people with whom we walk.

Books can help us do this. An outstanding recent example is No Friend But the Mountains: Writing from Manus Prison, by Behrouz Boochani. He is a Kurdish refugee who has been imprisoned on Manus Island for many years. A journalist and a writer of great power, he sent the content of his book in text messages to friends in Australia, and then worked with his translator and others to write this book. It will surely be remembered as a great work of literature as well as an account of what it means to be a refugee.

Boochani’s description of his two attempts to reach Christmas Island by boat displays a rare gift for storytelling—the reader seems to hear the storm and feel the drenching spray of the waves. His mastery of language enables him to explore the cosmic themes of sea, storm and fate, and the way individuals respond in crisis.

Most of the book describes daily life on Manus Island—a life of endurance within a prison, in which there are no events. Space is fenced in and time has no past or meaningful future. To capture that experience, Boochani describes people only with honorific titles, such as the Fat Boy, The Prophet, The Cow and The Gentle Giant, which pare them down to their characteristic stances. He explores character by observing and reflecting on his own and others’ response to the dehumanising forces at work in the storms at sea and especially in prison.

He shows in harrowing detail the experience of being imprisoned: the effects of heat and overcrowding, of the pervasive stink of sweat and latrines ankle deep in urine, of hunger caused by inadequate and poor food, of the reduction of people to numbers, of the long queues for everything, of the hierarchy in the prison of government representatives in Australia, unseen officials, officers watching and officers in direct contact with the refugees, ancillary nursing and catering staff, the local PNG officers and the refugees themselves, and the combination of arbitrary changes of regulations and processes and of the refusal of officers to take responsibility for any decision to vary regulations. In the most shameful example, this led to a son repeatedly being prevented from telephoning his dying father.

These features of Manus Island were not accidental. They were designed to turn people into sheep, terrified by any rumour, malleable to every command, and unable to take responsibility. When reflecting on the mechanisms by which the prisoners’ behaviour and feelings are controlled, Boochani presents a system in which all the relationships of one person with another, with the natural and built environment, and with time are controlled in such a way that freedom is excluded, humiliation, dependence, competition between people and self-disgust are fomented, power is exercised hierarchically and arbitrarily, and regulations are made by unnamed people at a distance from the people to whom they apply.

Boochani understands that the hell he inhabits is the intended outcome of a policy that sent people unwanted in Australia to the prison so that their suffering would deter others from coming by boat.

From my observation, in Australian detention centres such a system is the inevitable result of thinking that the end justifies the means. Once that position was enshrined in the mandatory detention, and later in the exile to Nauru and Manus Island of innocent people, their subsequent treatment was inevitable—controlled by considerations of security, cost and concealment that were increasingly, and now totally, divorced from the human dignity of the people affected.

Within Australia over the last few years, the treatment of refugees has been increasingly shaped by operational questions of how to guarantee absolute control. The complex and hierarchical steps created between policymakers and those dehumanised by the policy ensure that no one in the process regards as salient the consequent degradation of the people seeking protection. As the goal of deterrence has been fused with the goal of electoral advantage, the corruption has spread to affect the way that the unemployed, Indigenous Australians and the homeless are treated.

Boochani’s story, however, is ultimately not about death but about life; not about slavery but about the search for freedom. He details how he and others seek a standing place in this dystopia and so might find grounds for self-respect. These underlie the formal titles he gives to people. Some seek it in manners—respectable dress and address, others in attempts to lead, others in jesting, others simply in being the first in queues and being fed, others in attending to the needs of their neighbours.

Boochani is sensitive to the way these masks can be self-delusion; clothing oneself with virtues or power that one knows one lacks. But he also recognises that to take on such social roles is an act of resistance. For example, Maysam the Whore—a young man with a gift for satirical dance—gathers people to his subversive performances, much to the discomfort of the guards.

Boochani tries to find himself through suffering in solitude. When alone, he can sometimes wonder at the beauty of nature around the camp and also remain connected with the dreams and memories of his youth, with all the dislocation caused by war. These lyrical passages lighten the heaviness of the storytelling while highlighting the squalor and brutality of the prison.

In the final section of the book, he has a lyrical vision that brings together the mountains of the Kurdistan of his childhood, his first love, the flowers and vegetation of Manus Island. He concludes the book with an event that matches in its epic power the sea journey with which it begins. The prisoners riot and so, despite their lack of self-awareness, assert their freedom. The riot was brutally put down in one section of the prison. The other prisoners were marched outside the fences and later returned through a room piled with groaning and beaten people.

The concluding lines of the book are enigmatic.

Both chants blends into one /

The lament … of nature … this lamentation of nature /

This lament … of a human … this lamentation of the human being

So the book ends apparently in the death of the noblest prisoner and in the victory of Australian power. Or does it end with the vindication of freedom? Christian readers may read in it a hint of resurrection.

As an Australian, I read this book with anger at what is done in our name on Manus Island and with shame at the portrayal of Australians as incurious, faceless and brutal empty vessels, compliant cogs in a disrespectful machine. With shame, too, at how we imagine people who seek protection as victims, heroes, vicious, virtuous, pawns, as causes—as anything but real human beings like ourselves.

No Friend But the Mountains is one of the great Australian books, uncompromising in its exploration of humanity under torture, assuredly poetic in its style, and revealing of national character. It will continue to be read in the distant future when the people who devised Manus Island are remembered only as footnotes. At the end of the book the prisoners briefly recover their humanity at a heavy cost. The book asks what price we Australians will place on our own humanity.

I don't want slaves working for me