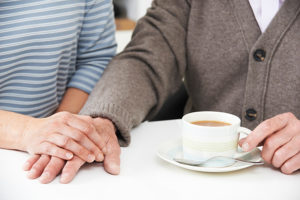 Before the chasm that divides before and after.

This world and the next.

Words of glue and grace, of cliché and mumble, and hints to other stories in a wink or a sigh or nod.

Not clever words, or pithy or mystic or odd,

Just the everyday shorthand of the loved familiar.

Anointed with the watery blessing of a slow smile,

For spending a quick half hour with him between chores on a day off and the load of washing and time to read a book and catching up with a friend and the excuses that eat voraciously into the things that matter.

Those last thirty minutes of love and duty wrapped together in the not knowing of that last time ever.

The gaps of silence and the casual intimacy of father and daughter as the conversation made its usual way;

Enquiries as to daughter, husband, siblings,

Enquiries as to work and long ago friends,

Enquiries as to the world beyond the 5pm dinner of mash and meat for aged gums,

His eighty-five good years and the children—six little Australians and an English honeymoon child—loved in his distant truthful way,

The siblings knotted together in the warm skein of shared history and the fibs and fettlings of time gone by.

A man who knew his God and believed—in his way,

A man who somehow knew the asceticism of the priestly life and thanked the Christian Brothers for the old days, not of strap, but of scholarship,

A man who lived the life he planned and was grateful for the good that came his way.

A man who loved his children,

A man who was our deep anchor in the sometime rambunctious, chaotic, whirligig madness of seven kids, and measles, and broken hearts, and delivering babies, and doling out pennies for the plate and trying to get a word in at the dinner table, and checking my written words to elicit meaning from the meandering …

Who lived his days upon the earth,

And now lies under it.

A quick half-hour visit and the leaving of some favourite biscuits and an article or two cut from the weekend paper that he never got to read,

And the promise to see him next week.

All the time in the world he used to say and we would sigh as we rushed to the next thing, importuned by an improvised urgency,

And now we will have all time

In the next world …

And so I hold on gratefully to the last words, his benediction to an eldest child,

A thank you and a cheerio.

And that’s enough for me.

Editor’s note: The poet’s parents were cared for at Vincenpaul Hostel, a Melbourne-based aged care service formerly associated with the St Vincent de Paul Society. It continues to be run by a not-for-profit organisation and is now the mecwacare Simon Price Centre.