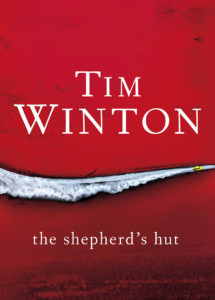 Seen from outside, Jackson (Jaxi) Claxton, the narrator of The shepherd’s hut, is tabloid fodder—raised in a small farming settlement, with a brutal father, friendless and violent at school, a drop-out, foul-mouthed, caught having sex with his cousin Lee, he discovers his father crushed by a fallen jacked car, leaves traces of himself all around the scene and runs away into the bush with little drink or food, and a rifle. At the end of the book he is driving a stolen car, with a shotgun in the boot, heading to see his cousin to begin a new life with her. One can imagine the media joining the dots and moralising a week or two later on a born loser.

The genius of Tim Winton in this enchanting novel is to give Jaxi a voice that is brutal, limited and obscene in parts, but also open to self-questioning and observation. Jaxi is resourceful, courageous in facing his fears, faithful in his love for Lee, and honest in knowing what he does not know. In the course of the story he discovers where he is, who he is and what he is. He also finds words to describe himself and aspects of the world he had excluded. Throughout the book the lyrical runs alongside the crude, promising to transform it. At a critical point in his relationship with Fintan, an old Irish hermit living in the shepherd’s hut, he realises that Fintan has searched his phone:

He’d had half the fricken day to scroll through me pics and messages. His eyes and fingers had been all over Lee, across me whole bloody life.

Barely controlling his rage, Jaxi storms out down to the windmill, and describes the scene:

The easterly was petering out to nothing when I went down the mill in them slope-sided boots of his, the blades of the thing was hardly turning. The lake was gone pink with the evening sun and a mob of birds stretched across the sky like a scratch. I felt so flat. And stupid.

The transition from anger to observation with its exact simile brings home the poignancy of a young man’s life, poised between the brutal and the angelic, the crude and the refined, both mixed and occasionally transcended. In the words, many thousands of miles away from Jaxi’s, of Gerald Manly Hopkins:

The key to Jaxi’s growth in self-understanding and self-possession lies in his three-month stay with Fintan. Their relationship is inevitably edgy because both are trapped there, both have a past that they are in flight from and want concealed. For that reason they fear for one another. Jaxi repels questions by taciturnity, Fintan by volubility—after eight years alone in the hut he speaks to himself constantly, quoting from poetry and the Bible to construct a world that is bearable.

Both Fintan and Jaxi explore questions of meaning, pressing each other in their vulnerability, alternately resisting and responding. When Jaxi recognises that Fintan is a Catholic priest who has been exiled by his superiors to the hut, he responds violently, assuming that he must be a paedophile. After Fintan assures him that his crime was far worse than that, Jaxi probes the oddity of a priest who is angry with the Church and ambivalent about faith in God.

In their encounters Jaxi tests the possibility of finding personal meaning while Fintan explores the viability of inherited meaning. It is done partly through conversation but more through the everyday bodily rituals of going to the edge of the lake at sunset, of cooking damper and killing animals for meat, of washing, disposing of human waste, sharpening knives, using tools and of making relationships. Jaxi confronts Fintan with the oddity of a priest who does not seem to believe in God. He in turn is confronted by a person who cares for him and who constantly points to the something more that lies in nature and in human beings: in the mirages on the lake that bear human history, in the deaths of mothers that linger, and the possibility of being an instrument of God by doing good to others.

This sifting of meaning is done through basic human realities that are also symbols. Jaxi’s journey has revolved around simple things become central to survival, like water, finding and killing kangaroos and wild goats and hanging them up to dry, looking into the eye of a kangaroo you have killed, sharing damper, shedding blood, using trees for shelter and cover, dreaming of the beloved as she waits at the end of the journey, and above all making the human choices about facing or evading death.

For readers, many of these symbolic actions may deepen into myth: the goat as the symbol of evil, as beast of sacrifice and as scapegoat that atones for people’s sins; the blinded eye of Jaxi’s father and his own damaged eye recalling the blinded Polyphemus, a symbol of monstrous violence; the water, bread, food, sacrifice and vicarious death that are bound in the Christian story.

At the closing of the novel both Fintan and Jaxi have come to know that they have been instruments of God to one another. Jaxi has come to the firm grasp of who, what and where he is, which enables him to journey on with sureness, come what may.

For people with many words to express the meaning of their lives, and also for people who feel no need of words, this is a challenging book. In focussing on the mystery and the possibility of Jaxi’s outwardly unattractive life, it makes a claim for the high value of all human beings.

But the book also makes clear that no words to do with meaning and no symbols of religious faith can function as answers. They must be charged with meaning in the messiness and dirt of human living, and tested by the depth at which they are lived by those who proclaim them. They must be put to the test. Jaxi is not alone in his instinctive distrust of Catholics as human beings, let alone as sources of wisdom. The symbols of faith come alive only when they are explored under stress.

From this perspective The shepherd’s hut retraces the ground of Matthew Arnold’s 19th century poem, ‘On Dover Beach’, with its recognition that, as the overarching belief in a God who cares for the world withers, meaning has to be sought in personal love:

Ah, love, let us be true
To one another! for the world, which seems
To lie before us like a land of dreams,
So various, so beautiful, so new,
Hath really neither joy, nor love, nor light,
Nor certitude, nor peace, nor help for pain;

In the poem, the collapse of larger meanings makes the narrator withdraw to relationships. In The shepherd’s hut the starting point is Jaxi’s relationship with Lee. From that he is drawn to find within the world inklings of light, peace and help for pain. It is a journey to hope.