Australian Catholic Religious Against Trafficking in Humans (ACRATH) is a leading voice in the fight against modern slavery in this country. Endorsed by Catholic Religious Australia, the organisation works to eliminate human trafficking globally, in the Asia Pacific region and here in Australia, as ACRATH Executive Officer Christine Carolan writes.

Yes, slavery does occur in Australia and around the world today and it takes many forms.

Girls are forced to marry; women come to Australia seeking employment and become bonded to work in brothels or are sexually exploited in domestic settings; workers come here with the hope of employment on a farm or in construction and end up exploited for little money.

Globally, we contribute to the slave trade by purchasing products, such as clothes, food and technology, that have been made using forced labour, often forced child labour. Vulnerable people worldwide are trafficked.

The United Nations Office on Drugs and Crime (UNODC) in its 2016 Global Report on Trafficking in Persons says:

the movement of refugees and migrants, the largest seen since World War II, has arguably intensified since 2014. As this crisis has unfolded and climbed up the global agenda, there has been a corresponding recognition that, within these massive migratory movements are vulnerable children, women and men who can be easily exploited by smugglers and traffickers.

We can stop human trafficking and we are changing things here in Australia through a local, grassroots response and through policies and law. The more people demand change, advocate for change and purchase justly, the sooner slavery will end.

Buying power is a weapon against modern slavery

It is estimated that Australians spend up to $3 billion on chocolate a year, with sales peaking at Easter. Cocoa is a key ingredient of chocolate. Much of the chocolate sold in Australia is made using cocoa beans picked by children, many of whom have been enslaved or forced to work in exploitative conditions.

The International Labor Rights Forum estimates that there are more than one million children working in the cocoa sector in West Africa. These children have no, or limited, access to education and other human rights. Most of these children have never tasted chocolate and they never will.

To ensure your chocolate, tea and coffee are slavery-free, only buy products that feature one of these three certification labels: FAIRTRADE, Rainforest Alliance or UTZ.

ACRATH works closely with schools, parishes and communities on the slavery-free Easter chocolate campaign. If you are interested in finding out where you can buy slavery-free chocolate during Lent please go to www.acrath.org.au/take-action/slavery-free-easter-chocolate.

Many school staff rooms are also now transitioning to slavery-free tea and coffee, which is readily available in many major supermarkets and through OXFAM.

A maths class at Aquinas College in Ringwood, Victoria, did research that convinced the school’s business manager and executive board that transitioning to FAIRTRADE tea and coffee was competitive in cost.

According to the Aquinas students: ‘It is important for Aquinas College to implement Fair Trade tea and coffee so that the College can rise to the challenge from Pope Francis to do something about suffering, to shun indifference and avoid becoming an accomplice. Fair trade products are free from exploitation, assuring just wages and safe working conditions, to combat poverty.’

Clothing is another industry where people, including young children, in developing countries often work in unsafe conditions for little money, making clothes that are sold in Australia.

Slavery-proofing supply chains is a challenge that many companies, charities and businesses are now tackling. This means looking at where goods and services come from, who produces them and ensuring they are slavery-free.

In a ground-breaking project, ACRATH is working closely with St Vincent’s Health Australia (SVHA) across its 28 sites to ensure they procure goods and services that are slavery-free. This means SVHA will look at all goods and services and ask questions like:

While many large companies are slavery-proofing their goods and services because they want to do the right thing, the Modern Slavery Act 2018, which was passed by Federal Parliament in November, will put pressure on businesses to comply.

The legislation requires large companies (with a turnover of $100 million or more) to report to the Australian Government, outlining their efforts to search for slavery in their supply chains, and then show what they are doing to eradicate this slavery.

The Act comes after years of collaborative work by ACRATH and other NGOs working to combat human trafficking.

For several years ACRATH has worked on the Federal Government’s national roundtable on human trafficking and slavery to explore slavery-free procurement of goods and services. We have worked with government, big business and civil society on a supply chains working party for two years to identify the need for this new legislation on modern slavery and to shape the legislation.

The Modern Slavery Act is the result of work by the roundtable, but the community has also made an enormous contribution through letter writing and visiting politicians. We have pushed hard and had several important elements included in the legislation, including that the government is required to report about its own procurement.

While much has been achieved, the eradication of modern day slavery is a long way off and will require people making changes to what they buy and use.

We need the average consumer and big business to play their part in making the world slavery-free.

To join a campaign, or for more information, contact rap@acrath.org.au or visit www.acrath.org.au. 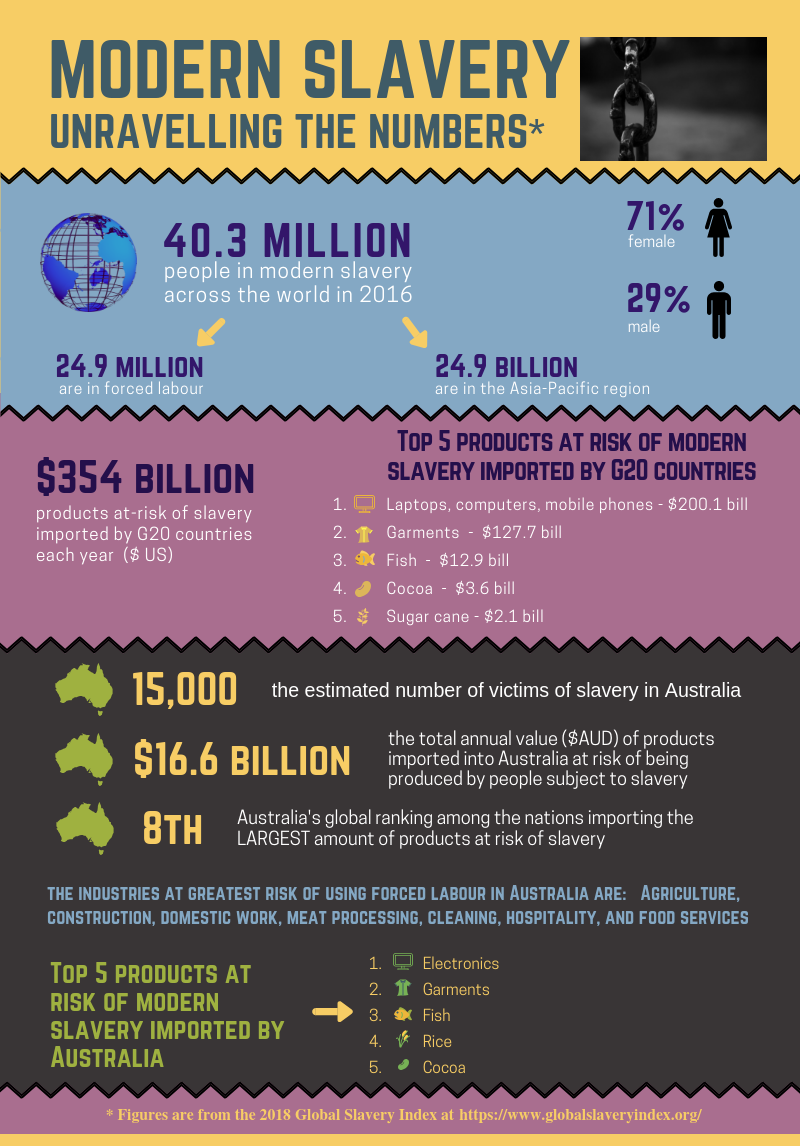 Modern slavery is a crime against humanity: Pope Francis