A hallmark of the St Vincent de Paul Society is its action to address poverty and homelessness. In 1961 the Society in South Australia opened the Vincentian Men’s Shelter in response to the increasing number of men living on the street. Over the last 57 years some 900,000 bed nights have been provided.

Faced with the growing homelessness issue for women and children, the Society in South Australia has responded by establishing a 24-hour domestic violence crisis centre. The twenty-room facility provides safe, secure accommodation and meals for women and children fleeing domestic violence. Since opening in late November 2017, 84 women and 85 children have been supported by the Vinnies Women’s Crisis Centre (VWCC).

The commitment by the Society in South Australia to the establishment of the VWCC is an immediate and effective response to women and children fleeing domestic violence but long-lasting societal change to end violence against women will be achieved through the White Ribbon advocacy campaign.

In 1991 a male-led group formed a movement known as White Ribbon in response to a Montreal student who massacred 14 female students on 6 December 1989. Their aim was to raise awareness amongst men that violence against women must not be tolerated. Since 1991 the White Ribbon campaign has gathered momentum across the globe and is bringing about real change in workplaces and more broadly across society.

In late 2016 the State Council of the St Vincent de Paul Society in South Australia endorsed the goal to achieve White Ribbon accreditation. The first step was to undertake a baseline survey with the 3000 strong workforce. This was a huge task for a volunteer-based organisation with many challenges such as the requirement that all surveys be submitted online. To overcome this obstacle hundreds of members completed paper survey forms that were then transcribed to online surveys.

Response to the survey was very strong, with over 700 completed forms. The key question was ‘How likely are respondents to identify violence against women?’ which included rape, sexual assault, physical assault, domestic abuse, emotional abuse, psychological abuse, financial abuse, verbal abuse, cyber abuse, sexual harassment, bullying and harassment and stalking. Over 75 per cent of respondents were very likely to understand sexual, physical, domestic and emotional abuse but less certain of the other categories, with responses ranging from 63 per cent for financial abuse to 72 per cent for sexual harassment. Disappointingly, of the completed forms only 26 per cent were from men.

The result of the survey has seen a significant improvement across the Society in awareness and understanding by our staff, volunteers and members of what constitutes and how to respond to violence against women in the workplace as a consequence of the accreditation. When sending through our follow-up survey results, White Ribbon Australia highlighted that the outcomes demonstrated the great internal communication and training that resulted in an organisation of our size achieving a response rate in excess of 30 per cent and the percentage improvement in the various questions.

The results form the foundation and springboard for ongoing cultural growth in the elimination of domestic violence in the workplace and wider community over the next three years. 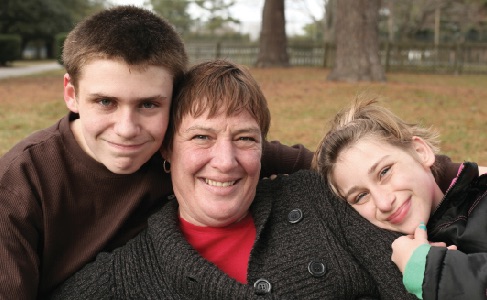 The White Ribbon surveys are just one small part of the accreditation process. There are 15 categories to address in the application including leadership, internal and external communication, staff training, contractor standards, response to perpetrators and communication of policies and procedures.

A domestic violence policy is a key requirement of White Ribbon accreditation. Unlike a bullying and harassment policy, the DV policy has a number of special conditions. For example, there is a strong emphasis on training. St Vincent de Paul Society leaders including Shop Managers, Warehouse Managers and Special Works Managers attended a one-day training course to better understand domestic violence and ways to address it in the workplace. This group became White Ribbon Champions tasked with guiding first responses to family violence and changing the workplace culture. Over the next three years training will be provided to all of the Society’s staff and volunteers in South Australia.

While training is essential there is a need to provide practical support to both victims and perpetrators. Workers who have been victims of domestic violence are able to access flexible workplace arrangements including an additional two weeks paid special leave.

Support is not confined to the victims but also extends to perpetrators. Unlike victims they do not have access to additional leave but can use annual leave to attend specialist services including the Employee Assistance Counselling Program (EAP) because it is important to address the root causes of a perpetrator’s domestic violence.

The Society is taking a stand against domestic violence, whether it occurs inside or outside the organisation. We are committed to supporting employees and volunteers suffering from domestic violence, as well as those colleagues who identify with and respond to disclosures. We aim to assist victims/survivors to maintain their work with us by providing a workplace that upholds everyone’s safety and right to be free of violence. The leadership shown by SVDP SA can be a model for the Society nationally. We must no longer tolerate violence against women.

Inequality on the rise

Discipleship and practice of reverse hospitality