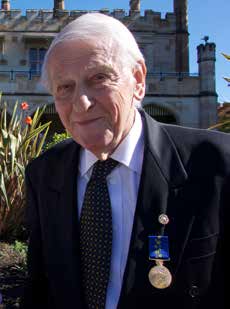 Revered Vincentian Rupert Hudson has died in Sydney after a brief respiratory illness. He was 88.

A lover of rugby league and a recipient of the Order of Australia Medal in the Australia Day Honours list in 2014, Rupert (otherwise known as Rupe) is remembered for his outspoken mind, passion and humour.

He graduated from Sydney Technical College as a chemical engineer in 1951 and spent 40 years with the American company Ferro Corporation, retiring as General Manager of the Vitreous Products Division in 1985.

His commitment to the St Vincent de Paul Society extended over 60 years, commencing in 1957 when he joined the Harbord Conference, on Sydney’s northern beaches.  He was president of the conference from 1961 to 1964, and later served the Society at a regional and national level.

‘As National Council President he pioneered the promotion of youth leadership within the St Vincent de Paul Society in Australia and internationally,’ the Society’s Amelie Housing CEO Brian Murnane said.

When he stepped down from the role in 1991, Rupe became a member of the governing body of the Catholic Theological Union at Hunters Hill, in Sydney’s inner west. He also taught religion in state schools.

The Society’s archivist, Mike Moran, remembered Rupe as ‘a great, knockabout bloke who was down to earth yet highly spiritual’.

Back home, on almost every Friday from 1990 until recently, he visited Sydney’s Villawood Detention Centre ‘to be a friend, supporter and advocate for people detained, pending a ruling on their refugee status,’ Murnane added.

His commitment to social justice was unwavering, and he was well known for speaking his mind.

‘If there was something annoying him, he would have to say it outright,’ Murnane said.

On one occasion Rupe was asked to pay a tip by a restaurant owner in Canada.

‘Rupe said to him: “You should be paying your employees a just wage so that they don’t have to rely on tips”,’ Murnane recalled.

Rupe’s interest in rugby league involved a 60-year association with Manly Warringah Rugby League club. He was a foundation member of the club, player, coach and chairman.

Despite losing a leg in a car accident when he was 33, he could still run as fast as the other players, ‘with one leg and a crutch,’ John Brannan, a fellow parishioner and friend of Rupe’s claims.

‘He was a Catholic man who always gave a good example of how to live a Catholic life,’ he added.

‘He loved politics and we got on very well. He was tough and some thought he was abrasive but I knew him as sweet, fair-minded and full of social justice.’

Hudson wrote the Society’s first ever mission statement in 1986. It was written on the back of an envelope while he was traveling on a bus in Canada. A slightly modified version appeared in the 1991 Manual of the St Vincent de Paul Society. It read:

The Mission of the Society of St Vincent de Paul in Australia is to deepen the Catholic faith of its members—to go out into our nation to heighten awareness of Jesus Christ.

We do this by sharing ourselves—who we are and what we have—with the poor on a person-to-person basis.

We seek to cooperate in shaping a more just and compassionate Australian community, and share our resources with our twinned countries.

Our preferred option in this mission of service is to work with the poor in development, by respecting their dignity, sharing our hope, and encouraging them to take control of their own destiny.

Placing our lives in the potter’s hands