The St Vincent de Paul Society has been tracking gas and electricity prices across the national energy market since 2008. Our most recent report, National electricity market: Time to shed some light on this market, has been released and it explores changes in prices and the drivers of these changes across the various states and territories. We hope these reports provide valuable information to volunteers, members and the people we assist. A state-by-state analysis and interactive workbooks can be found at vinnies.org.au/energy.

Our report ‘How energy prices are tracking’ analyses changes to electricity and gas prices across Australia from July 2009 to July 2017 in order to explore when and where prices have increased or decreased. In relation to electricity, we found that regulated and standing offer prices (the base rate) are up in most jurisdictions compared to July 2016. However, the size of the increase varies between jurisdictions. Gas prices have also increased in all jurisdictions. The highest prices in the country continue to be in South Australia for electricity and Queensland for gas.

These price increases adversely impact the lives of low-income individuals and families in our community by increasing proportion of their income having to go toward utilities leading to financial stress. Anecdotally members of the Society have noticed greater numbers of people seeking help because of this pressure on household finances.

Cost drivers: how the states fare

We also explored in detail cost drivers of each component of the electricity bill for each jurisdiction. For electricity market offers, we estimate that the retail component in Victoria is between 11 and 18 per cent (depending on network area).

We also looked at price dispersion, the difference between the best and worse offers, and monthly changes to electricity market offers from the ‘big three’ retailers (AGL, Energy Australia and Origin) from August 2015 to July 2017 in NSW, Queensland, South Australia and Victoria. The maximum difference between all electricity market offers is greatest in Victoria and South Australia (over $1000) and lowest in the ACT (just under $100).

The maximum difference between the annual bills produced by the big three, however, is much lower ($100 to $200, depending on jurisdiction and time of year). Considering that the average annual bill for households using 6000 kWh per annum for the same period was $1560 in NSW, $1815 in Queensland, $2070 in South Australia and $1460 in Victoria, the difference between the big retailers’ offers must be considered relatively low. 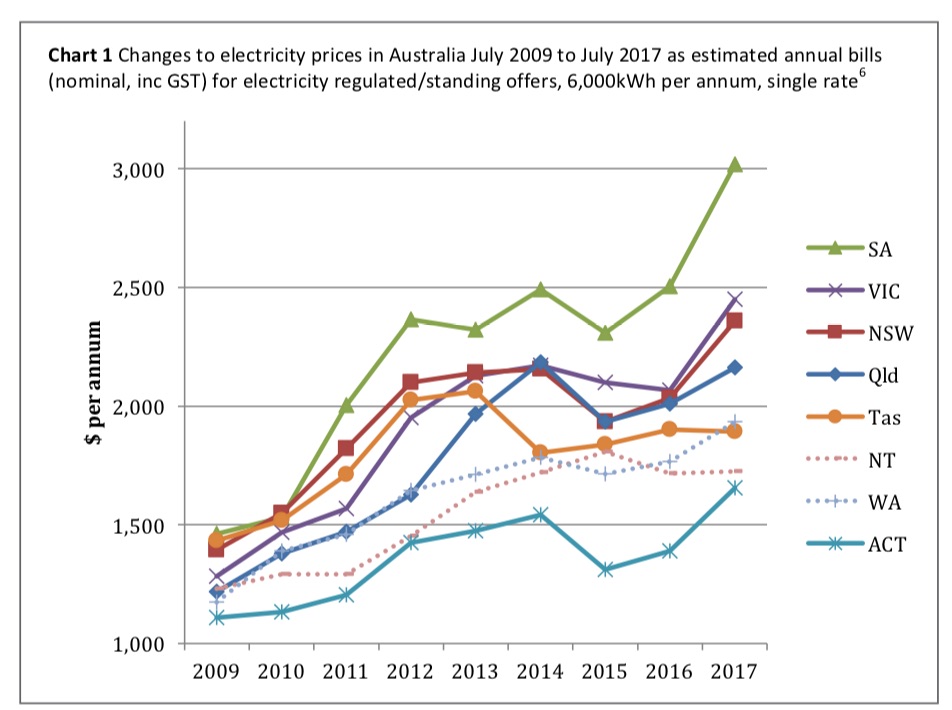 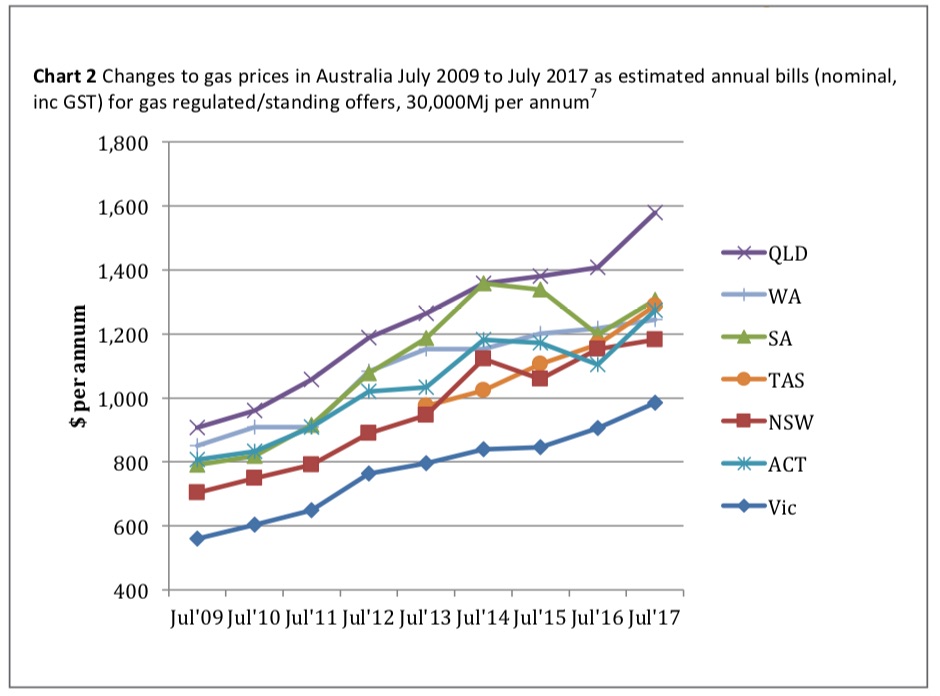 We have also started to look into solar offers in more detail. We found that in Victoria customers currently have the second highest electricity bills in general. Victorian solar customers with this consumption level have, on average, lower annual bills compared to customers in other jurisdictions with lower overall electricity costs.

A comparison of solar bills as of July 2016 to bills as of July 2017 shows that annual bills for solar customers in South Australia have increased the most (by approximately $150 for customers with this consumption level) while there were more modest increases in the ACT and NSW’s Ausgrid and Endeavour networks. In all other areas, solar bills have fallen. The bill-stack analysis for solar offers shows that the retail component is negative in Victoria’s CitiPower network and in the ACT (ActewAGL) while it is highest in South Australia (SAPN) at $248.

In our view, there is still a limited knowledge and understanding in the community of the various energy tariffs available, how they are changing, and how tariff changes impact on households’ energy bills and energy affordability more broadly. Only by improving awareness and understanding can we ensure that the regulatory framework (for example, in relation to price information and disclosure) is adequate, to promote a competitive retail market. Furthermore, this increased knowledge will allow for close monitoring of the impact price and tariff changes have on households’ bills, and the affordability of this essential service. But information alone will not solve these problems.

We have made key recommendations focussing on four areas where governments can improve upon the current state of energy policy to lessen the impact on low-income households:

Gavin Dufty is Manager of Policy and Research at the St Vincent de Paul Society Victoria. A state-by-state analysis and interactive workbooks can be found at vinnies.org.au/energy.