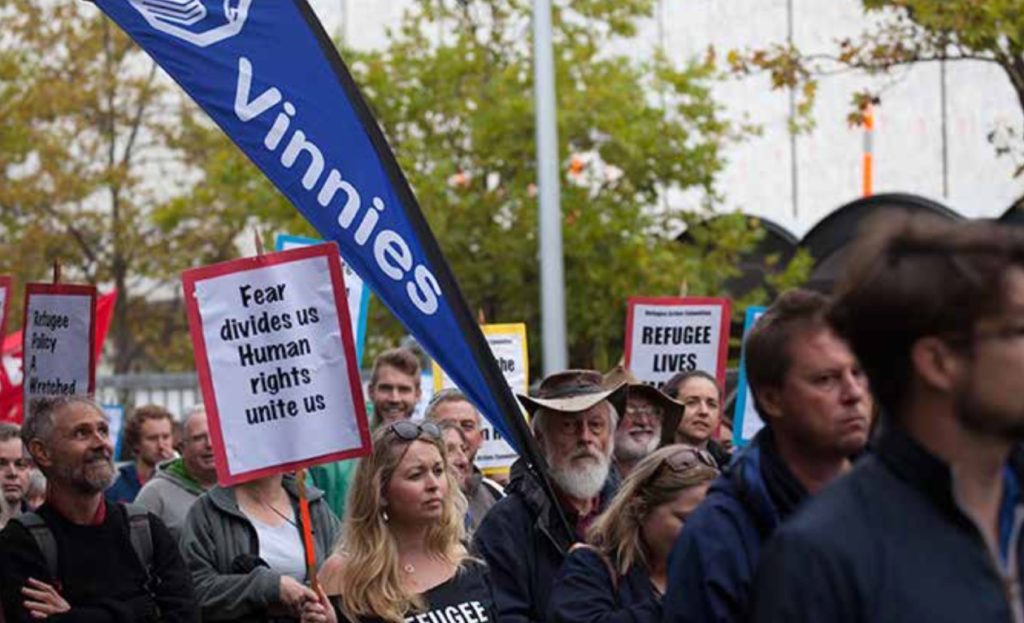 A strong contingent of Vincentians joined thousands of others in Canberra’s Civic Square on 9 April for the Palm Sunday Refugee Rally.

Waving blue banners stamped with Vinnies logos that soared high above the crowds, they were easy to spot among the many other faith based groups, unions, students, and political parties who came out in support of asylum seekers and refugees fleeing persecution.

Dr John Falzon, CEO of the St Vincent de Paul Society’s National Council, told the crowd it was time to ‘resist the politics of cruelty and replace it with the politics of love.’

‘We are here because it is time for us as a nation to collectively dream of a society that does not lock people out, or lock people up, for the crime of hope,’ he said.

Dr Falzon said refugees who ed from war, torture, persecution, pain and suffering, left with nothing but ‘a nugget of hope so small, it could easily be mistaken for despair.’

Other speeches were given by former asylum seeker Jamila Ahmadi, who fled with her family from Afghanistan more than a decade ago, and later studied international and development studies at the University of Adelaide.

After the speeches the groups made for a colourful sight throughout Canberra’s city centre as they marched and chanted for refugees to be welcomed to Australian shores.

Some carried banners emblazoned with the words ‘Refugee Policy a Wretched Disgrace’ and ‘Seeking asylum is not illegal’ and ‘Fear divides us. Human rights unite us.’

The event was organised by the Canberra Refugee Action Committee.

Other rallies like it took place across major capital cities and in some regional towns.

Congress 2017: taking the next step