On 23 February, the Fair Work Commission announced penalty rates on public holidays and Sundays for full-time and part-time workers would be cut in the hospitality, retail and fast-food industries.

The St Vincent de Paul Society responded with a media release that described the move as ‘a sad day for our nation’s history.’

National Council CEO Dr John Falzon said the ruling was ‘an attack on people who already struggle to survive.’

‘Cutting penalty rates will not create jobs but it will build inequality,’ he said.

The media release was picked up by ABC radio outlets across Australia, along with print media outlets in several states.

The Society also published answers to ‘Frequently Asked Questions’ on its national website, covering details of the proposed changes and who would be affected by them.

What are penalty rates?

Penalty rates have been an integral part of Australia’s industrial relations system for more than 100 years. They stem from a longstanding understanding that weekends and time with family, friends and community are valuable, and that those who miss that time due to work should be compensated. As such, penalty rates provide a basic premium for being at work during times when other people get to relax or spend time together—on weekends, public holidays, and at night. For many, that compensation helps to make ends meet.

What are the proposed changes to penalty rates?

On 23 February, the Fair Work Commission announced that Sunday and public holiday penalty rates will be reduced for workers in the hospitality, retail, pharmacy and fast-food industries. [1]

The loss in earnings varies by industry and type of employment. In retail, the reduction in penalty rates could result in a loss of $72 from a seven-hour Sunday shift. For a young person experiencing housing stress, such a loss in earnings could tip them out onto the street.

Who will be affected by penalty rate cuts?

The changes to penalty rates will affect more than 700,000 workers across the retail, hospitality, fast-food and pharmacy industries. These industries have the largest proportions of low-paid, award reliant workers.

Employees who rely on penalty rates to meet their household expenditure are most likely to be a single parent, a woman, a young person, someone in receipt of a household income less than $30,000, and/or living in regional Australia.

While a third of Australians rely on regular Sunday shifts as a part of their wage, nearly 40 per cent of young people rely on penalty rates to survive. For many, working on Sundays is a necessity, not a matter of lifestyle. Sunday penalty rates help to make up for earnings they don’t receive when they are studying, doing care work, or working fewer casual shifts than they need.

Recent studies show young people regularly struggle with cost-of-living pressures and a compromised work-life balance. [2] Student poverty has increased over the past decade, with nearly two- thirds of university students living below the poverty line. [3] They battle with unaffordable housing, insecure work, reduced access to social security, and low levels of student assistance.

Cutting penalty rates will only compound these pressures. 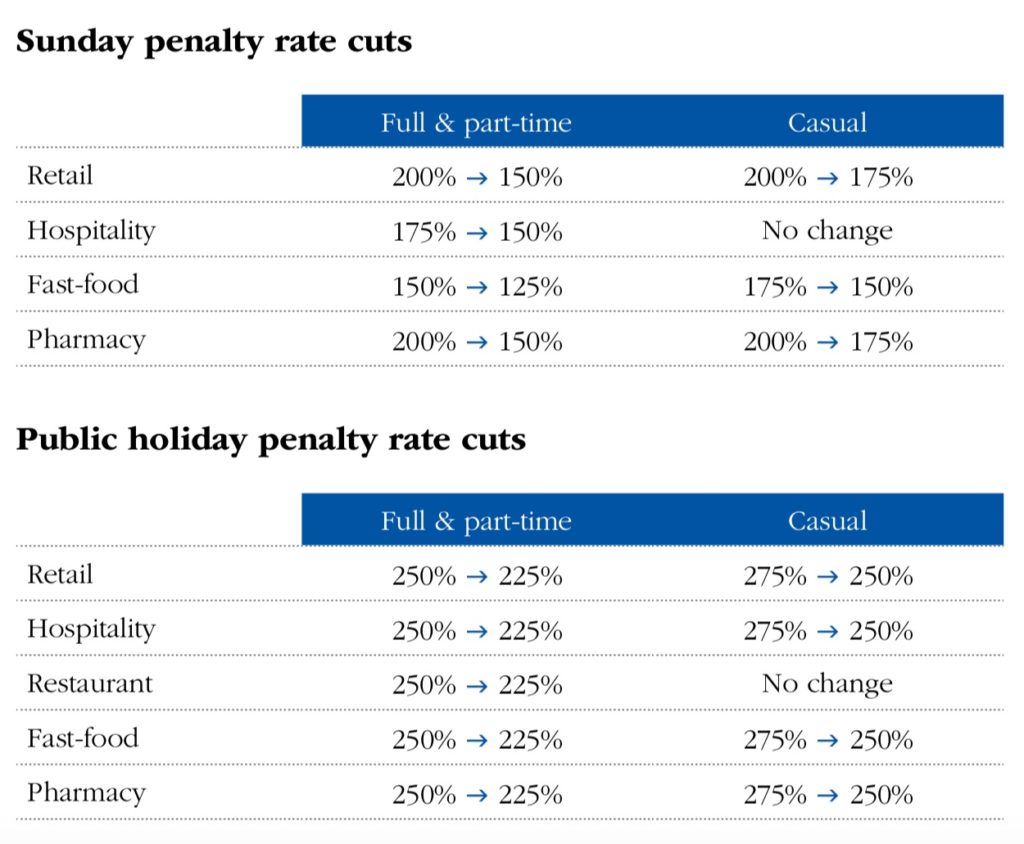 Cuts to penalty rates will disproportionately affect women and will increase the gender pay gap.

While they make up less than half of the total Australian workforce, the majority of workers in the sectors affected by the penalty rates decision are women. [4]

They often receive minimum award wages only, and are highly likely to rely on penalty rates to meet household expenses. [5]

For those with caring responsibilities, working on weekends may be their only option, given limited workplace flexibility and a shortage of affordable child care.

Cuts to penalty rates will inflict a heavy burden on rural and regional communities, where nearly one in ve workers is employed in the hospitality or retail sectors.

These communities already lag behind their metropolitan counterparts on a variety of socio- economic measures, including income.

Modelling undertaken by the McKell Institute shows that in addition to the financial hardship on workers and their families, a partial reduction of penalty rates would reduce discretionary spending in local economies by between $175 million and $353.5 million each year. [6]

Why does the Society oppose cuts to penalty rates?

Penalty rates are a vital part of the social safety net

The Fair Work Commission has acknowledged that ‘many of these employees earned just enough to cover weekly living expenses’ — yet they are the very people the commission has penalised.

Over the past decade, workers reliant on minimum wages have seen their income slipping further behind average weekly earnings and for some, below the poverty line. This trend is reflected in the growing number of ‘working poor’ who seek assistance and support from charities such as Vinnies. These are people who are holding down jobs but not earning enough to make ends meet.

There is no reliable evidence to support the proposition that reducing penalty rates will boost the economy and create jobs. [8]

Even the Productivity Commission has conceded that there are ‘several deficiencies’ in the evidence for cutting penalty rates, and that ‘robust evidence’ in favour of lower penalty rates is ‘hard to find’.

The notion that reducing penalty rates will create more jobs is not based
on empirical evidence, but relies on discredited ‘trickle-down’ economics, [9] which assumes the benefits will ow on to workers in the form of more jobs, as opposed to just increasing profit margins and inequality.

[3] Emmaline Bexley et al, 2013. University student finances in 2012. Centre for the Study for Higher Education, The University of Melbourne. https://www.universitiesaustralia.edu.au/news/commissioned-studies/Australian-University-Student-Finances-in-2012#.WhpEU7ZL28o

[6] The McKell Institute. Who loses when penalty rates are cut? April 2015

[8] Ray Markey, 2015. ‘Myths about penalty rates and those who rely on them’. The Conversation. https://theconversation.com/myths-about-penalty-rates-and-those-who-rely-on-them-49947